Marching on a New Journey: Dalian University of Technology Cooperated with 12 Japanese Universities to Conduct the Online Anniversary Commemoration of Partnerships 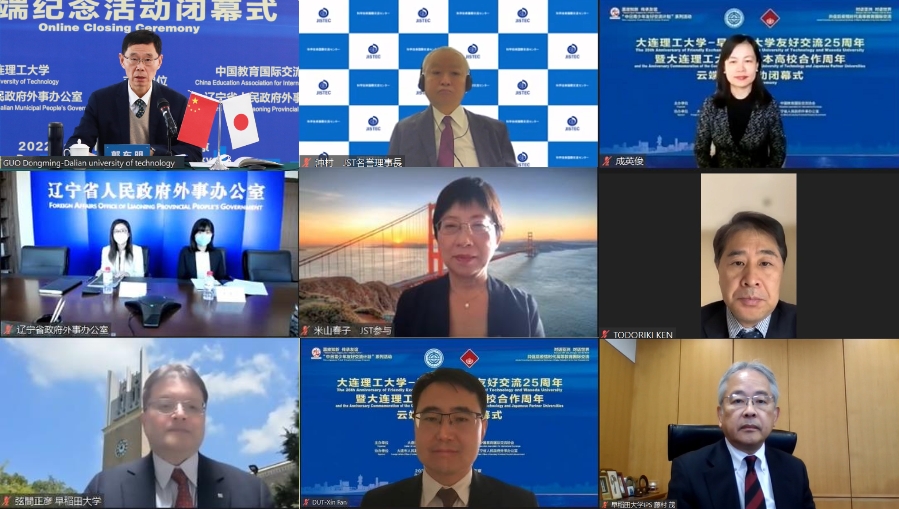 Ambassadors of the two countries, representatives of government departments, international institutions and the two universities attended the online ceremony.

The year 2022 marks the 50th anniversary of the normalization of diplomatic relations between China and Japan. Hoping to commemorate the mutual friendship at this historical node, DUT has held commemorative and academic exchange activities with 12 Japanese universities under the guidance of the Ministry of Education and with the support of various organizations since November 2021. About 4,000 representatives of Chinese and Japanese governments, higher education institutions, teachers and students participated.

The series of activities, as part of Sino-Japanese Youth Friendly Exchange Program of the Ministry of Education of China, builds a platform for promoting academic and cultural exchanges between the two countries, and starts a new journey of cooperation for DUT in the field of higher education in the post-epidemic era.

At the closing ceremony, Kong Xuanyou, Chinese Ambassador to Japan, Tarumi Hideo, Japanese Ambassador to China, Wang Yongli, Secretary-General of China Education Association for International Exchange, and Okimura Kazuki, Honorary Director of Japan Science and Technology Agency, expressed their congratulations on the partnership between DUT and WASEDA as well as their expectations to the universities’ future cooperation. DUT President Guo Dongming and WASEDA President Tanaka Aiji reviewed the history of exchanges between the two universities and are full of confidence in the future collaborations to jointly cultivate more outstanding talents for the world.

The commemoration ended in the chorus of "Forever Together" by students from School of Foreign Languages and intensive Japanese class in Engineering Schools of DUT. Teachers and students in Economics and Management, Architecture and Fine Art, Information Science and Software, and Japanese language carried out online exchanges after the ceremony.